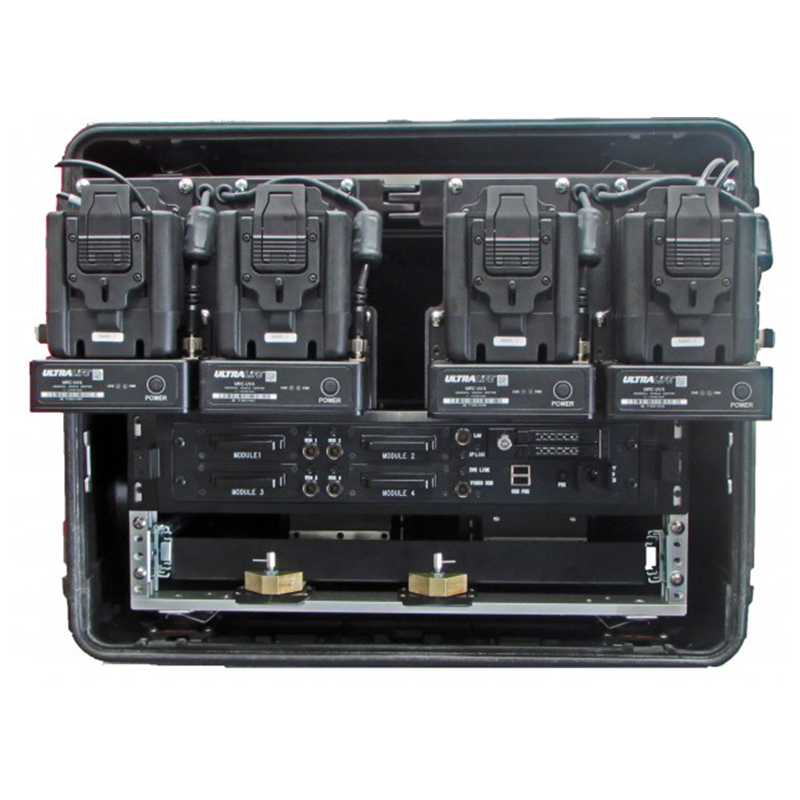 The rapidly deployable MRC-MC4 is a robust radio, waveform and bearer agnostic communication system that brings cutting edge technologies together in a streamlined, well integrated and flexible simultaneous voice and data package that can be utilised in Vehicles, Forward Operating Bases, Tactical Operations Centres and Base Stations for superior Communications.

The MRC-MC4 consists of four hand held radio pockets (MRC-UVA) capable of housing, charging and powering a myriad of currently fielded and developmental Tactical Multiband, MANET, ROVER and ISR radios. It supplies 20W (A-320V3) of amplification to 30-50MHz handheld radios, expanding their range on average by two or three times.

The integrated C-REACH(R) system offers a wealth of additional functionality.

It utilises WAVE to provide radio interoperability between disparate radio channels, types and waveforms. It also provides programming and RADIO over IP (RoIP) compatibility through the use of embedded PCs, a tablet interface and radio side connectors.

It supports the dissemination of radio channels, ROVER, Link-16 or other ISR system data and streaming video to local friendly forces and dislocated / dismounted soldiers via the MANET or other user defined bearer.

Additional flexibility allows the user to import Link-16 data from a terminal such as the ViaSat STT (Small Tactical Terminal), MOJO or similar.

The MRC-MC4 is flexible in configuration to allow use in a variety of vehicles in a 19 rack or transit case. An integrated DC power supply supports military vehicle power systems with an optional accessory to support AC power (not integrated into the system), while subsystem level depot repair, replacement or upgrade is possible with the support of the OEM.